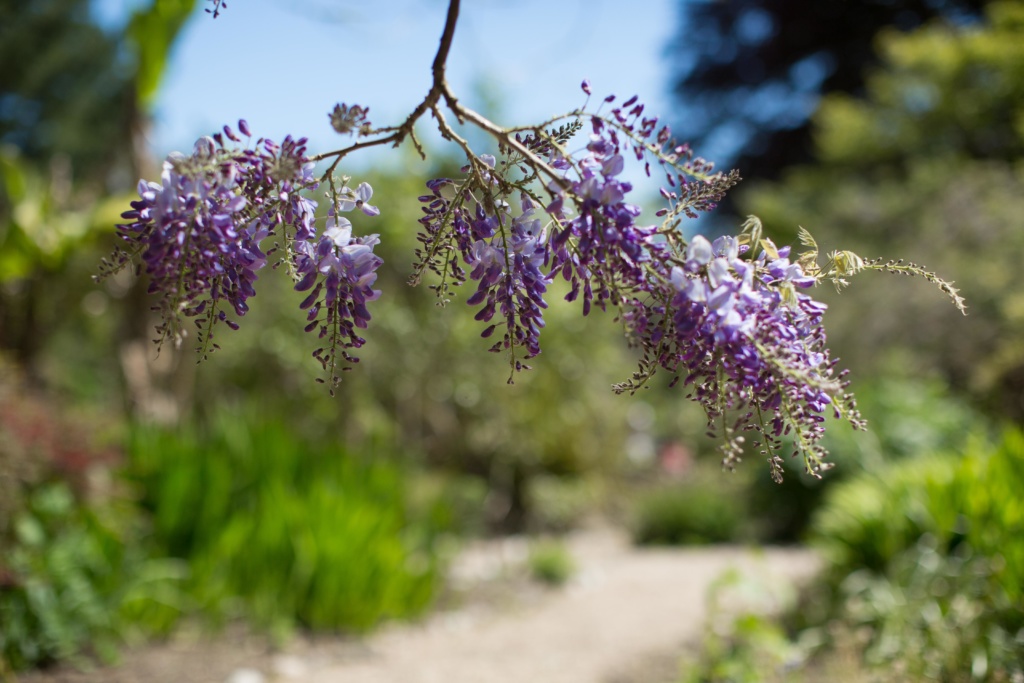 The Flower Garden became much neglected in the late 20th century and the original shingle paths became overgrown with grass. The area had been taken over by bluebells, foxgloves and other self-seeding plants. Recent development aims to return it to the original formal style.

The boundaries have now been replanted with Camellia japonica ‘Peachblossom’, an evergreen with dark green leaves and pale pink semi-double flowers. These will eventually form a low hedge that will contain the plants within the garden, whilst at the same time allow glimpses into the parkland.

The rest of the beds (around 30 in total) have been planted with herbaceous perennials and bulbs around existing shrubs. Most of these are at their peak in summertime and the Flower Garden is therefore at its best around July/August .

When you enter, immediately on the left in the raised bed is a group of Chatham Island Forget-me-nots Myosotidium hortensia with its glossy hosta-like leaves  and blue flowers that appear in early summer. These beautiful plants were introduced to this country by J D Enys. The first bed on the left  contains the very elegant drooping branches of the Huon pine Lagarostrobos franklinii (formerly Dacrydium franklinii), a rare and unusual slow growing conifer that is now protected in its native habitat Tasmania.

As you proceed through the rose-adorned arch, covered with rampant Rosa banksiae ‘Lutea’ and Rosa ‘Dublin Bay’, you can spot on the left the Wisteria with its racemes of scented pea flowers which bloom in late spring.

Against the wall stand the remains of the old glass house, which was used to display exotic plants that were thought unable to withstand Cornish climate.

The lower part of the Flower Garden, the Colonel’s garden is named after Colonel John Enys. At one stage this had a roof and would have allowed for tender plants to be grown.

Passing through the archway, you can find the bust of the Colonel on the outside of the wall, watching over the Stumpery.